"Immediately after the first ascent, always on the left you will see the Poggimele villa, owned by the Montepagani family."


"Continuing on Senese Romana (Via di Val d'Elsa) from deck to Elsa to Castelfiorentino left out from Brusciana, it near a bend in the road, take the path of Poggimele, towards Montepaldi. Immediately after the first ascent, always on the left there the Poggimele villa, owned by the Montepagani family. "

We have no definite information about the origins of the building, probably stands on the site of a small farming village documented in the XVI century, the Florence State Archives.

In '500 the Poggimele houses in the parish of San Bartolomeo to Brusciana, were owned by a certain Matthew Varchi and Jailbird Companions. Later they passed to the Bini, wealthy family Empoli owner among other things of the Terraio villa, to which must be attributed, with a high probability, the original core of the villa not precisely dated.

In the last century the property passed to Montepagani that in 1875 enlarged the villa and there joined by a lovely chapel whose facade follows eighteenth-century models, especially in the show window.
Unfortunately the main building, which over the years has brought many changes, came to the turn of the century in dilapidated condition and for this reason, in 1927, it became necessary a radical restoration which you must present forms. During World War II, the Poggimele villa was first occupied by German troops and soon after, in August 1944, settled there the headquarters of the allied troops under the command of General Mikkelsen.

The building recreates the characters of the villa "bourgeois" of the nineteenth century with frequent loans dall'aulica Renaissance architecture, readable in framed sketches of the corners and in the frames of the two windows at the sides of the facade, surmounted by a classical pediment. The compact block of the house is partly relieved from the porch of the main front, with beautiful motif of the three arches supported by pillars. Also interesting are the small oval windows aligned with those below. All around extends a beautiful garden, a worthy setting to the villa and the chapel of St. Joseph, which follows the natural decline of the hill, from which among other things, with a spectacular panorama of the Val d'Elsa in the days when the sky is clear also offers a view of San Gimignano and its towers. 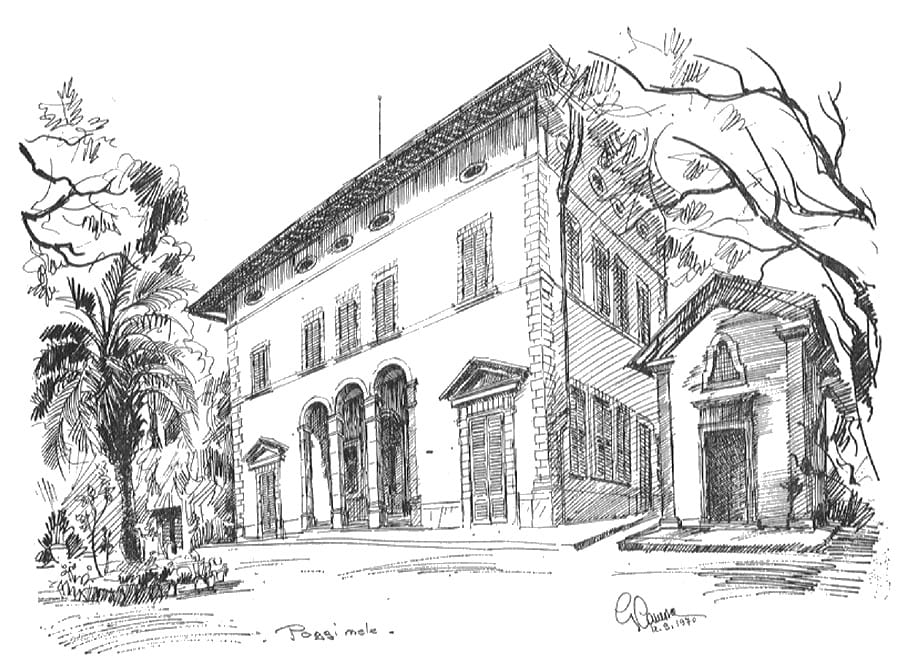